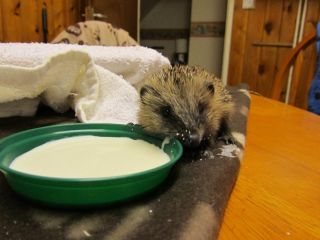 Discovered out during the day, Gaga was a tiny little juvenile, from a late litter, and aged about 2-3 weeks. He was cold and wobbly but was fortunate to be picked up by someone who got the little man on heat and gave him access to heat and water, the two most important pre-requisites to a hog’s survival.

He took to the syringe immediately on admission and also started lapping for himself straight away, making our life easier.

He developed very quickly into a self-sufficient hog, and did the usual trick of turning from a cute little munchkin into a surly, moody teenager.

He was moved to an indoor guinea pig hutch to enable him to focus on the three most important things to a hedgehog – eating, sleeping and pooing ! He rapidly piled on the pounds and exceeded our expectations of being able to pack on enough weight to secure a pre-release on 23 October 2012.

We were a bit edgy about pre-release as night time temperatures were set to plummet after his third night outside. However, we had to weigh up the potential stress of being kept captive indoors with the more preferable likelihood of a return to the wild this side of Christmas, and opted to try him in pre-release. It proved to be a good move as he settled well, and put on weight rapidly. The pen was lifted on 11 November 2012, although we suspect he will hang around now he has a settled home for winter (indeed he did – he hibernated in his home all winter, and woke in April 2013 to start his life in the wild).

Gaga has been a textbook case of a hoglet growing into a decent-sized juvenile in a short space of time : if only all hedgehogs were this straightforward to rehabilitate.