Disturbed by rebuilding work going on in a garden in Mapperley, these three little bundles of joy came to us in dribs and drabs on 12 and 16 July 2013. 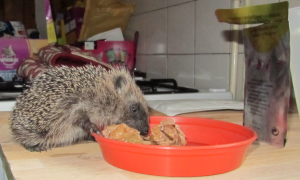 Their development was incredible, with Lucky and Star in particular putting on some pretty impressive weight gains. If they continue at this rate, we reckon they will be able to go to their new release site in West Bridgford much quicker than we could have expected.

Lucky and Star were moved into pre-release on 1 August 2013, whilst Luna joined them five days later (he was held back as his weight gains were not quite as impressive).

The three were released into the Lodge garden on 18 August 2013, a little later than we would have liked, due to complications arising with a suitable release site. In the end it was determined to release them here in the absence of convenient new homes.