This litter of four were discovered in a garden not five minutes away from the Lodge. Regrettably their mother had been killed in a road traffic accident. 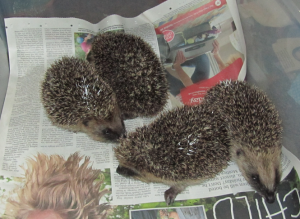 They stayed in their nest and were monitored by two sets of neighbours during the day until we could collect them. They were eating cat food and snoozing through the very hot days.

Within a day of them being admitted, their huge difference in weights had all but levelled out, and the four of them are causing much carnage in their shared cage every day. They were split up into two lots of two due to their increasing size on 31 July, then reunited again to a pre-release run on 6 August 2013.

Given the location they were found was very close to a busy road (and their mother had been killed on the roads), the four were released into the Lodge garden on 11 August 2013, as they had immediate access to Snape Wood.

Right up until their release, the four retained their very different personalities – Tickles was a glutton, Tiny was cheeky, Tom was shy (well, he is the only boy), whilst Tilly was very grumpy !