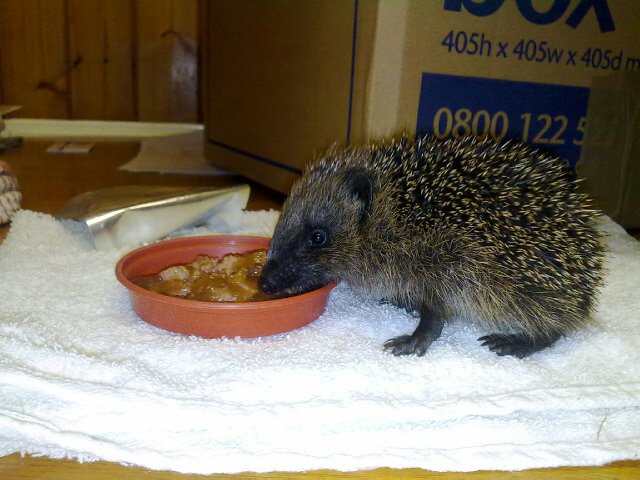 A delectable and very tiny Autumn juvenile, Sonic arrived on 22 October after being rescued by a kindly couple in West Bridgford, who took him in and offered him 24 hours rehydration fluid, keeping him warm on a hot water bottle in a very deep cardboard box – the perfect way to deal with a hedgehog casualty.

On admittance, Sonic was bright, lively and very inquisitive and amazingly free of parasites. It is thought either his mother had died or, more likely, abandoned him ahead of her own hibernation. He threw himself into a plate of kitten food, virtually demolishing the lot, and lapped some more rehydration fluid. After being offered a heatpad for the night, he refused its kind offer, deciding to hide under another pile of towels away from the heat source. Sonic had been wormed, but was struggling to put weight on – the good news is that at least he was not losing weight, always a bad sign.

He finally started making significant weight gains from 1 November. He cruised through the 200s, 300s and 400g, and at the start of December was up to over 500g, no doubt helped by a move to a bigger hutch with a sleeping compartment.

He decided to start hibernating in March and April 2011, scuppering any chances of any early pre-release.

Unfortunately, Sonic developed some mobility issues, displaying weakness in his back legs. Any chance of assisting him was hindered by his continual desire to hibernate, which he continued to do throughout May 2011.

He was examined thoroughly by our vets in June 2011 and no injuries were found. He did have his claws clipped under anaesthetic (it was impossible to do this with him when conscious as he is an extremely shy hedgehog and curls up in a tight little ball if you so much as you breathe near him) on 7 June and from then received a lot of exercise to get his legs moving properly.

Incredibly, Sonic regained full use of his back legs following a change in diet and the addition of vitamins (in particular vitamin B), and was soon zipping around the hogspital ward again. He started piling through puppy food and cat biscuits and very slowly built up his weight.

His amazing recovery was so positive he entered into pre-release here at the Lodge on 6 August – it was  interesting to see how he adapted to being outside again, something he has not had the pleasure of since admission in Autumn 2010 ! He did very well, although lost a little bit of weight in the first week.

By the second week, however, he’d piled the weight on and was foraging comfortably in pre-release. He was considered fit for release on 21 August, exactly 10 months after he was admitted.